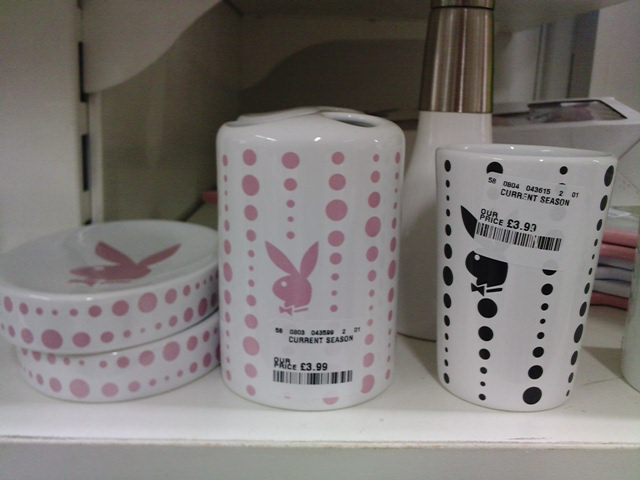 When he goes for a piss, he'll know just what sort of lady you are.

Hey you guys! (I’m talking like Sloth from the Goonies here, can you tell? Hmm, I’m slightly worried that this might marr the gravitas of what I have to say in this blog. On the other hand the juxtaposition of light hearted, childhood-remininscent humour may be the perfect backdrop by which to juxtapose my next piece, thereby making it seem more weighty by it’s counter-position. Yes)

You may remember my, some might say, ‘unreasonable’ bile at the playboy bunny motif. Read more about this here: https://worldofsheds.wordpress.com/2009/08/25/when-i-grow-up-i-want-to-be/

You’re probably thinking that I’m some sort of birkenstock wearing, sturdy bottomed, linen pant wearing feminist. If that turns you on, continue thinking it. I’m not one to question what you’re attracted to. Anyway, what is “attractive”? Let’s deconstruct that…let’s sit in a circle and ‘rap’ about it. Maybe some light role play questioning society’s views on what is ‘beauty’. Maybe we can spilt up some perfectly good words by putting a hyphen in them in a sexy post-modern way like ‘dis-ease’ or just put every single word in inverted commas in a sligtly questioning (some might say, ‘mocking’) way. Maybe we could use and empty chair to symbolise ‘the man’. I don’t know. I haven’t really thought about the implications of you being attracted to your ‘phantasy’ (spelt this way in the Freudian sense, Freud fans) of me. Anyway, I digress, albeit, erotically.

I suppose I am a feminist, yes.

Anyway, I’ve been patrolling the sector of this part of the country that I’m responsible for and have found some more playboy delights to entrance your eye. Ecce!

If you make your eyes go gozzy, a picture of a slag emerges.

And look! Just LOOK! at the bee-yoo-t-i-ful bathroom set you can get from TK Maxx. Nothing says ‘class’ more than a playboy soap dish. Reasonably priced too.  You’ll have some spare change from a fiver to spend on a t-shirt that says ‘This bitch bites’.  Girlfriend (I’m talking like Gok Wan here) your hands might be clean, but he’ll be thinkin’ you is dirrrty.

Please, if you spot any noteworthy playboy merchandise, do let me know so I can mercilessly ridicule it.

Until we meet again, my sweet, sweet rogues.